Some time in 1978 a close friend came to visit, bringing a brochure and exciting news of an exhibition he’d attended at the Royal Academy of Arts. The Light Fantastic Show was an exhibition of holograms by Holoco, a company comprising of three directors. The late Prof. Nick Phillips (a revered pioneer of holography), the late Anton Furst (Oscar-winning designer of Batman fame) and John Wolfe (manager of the laser shows for the Who pop group). I was awestruck by the concept of holography and had determined to become involved before ever seeing any. By coincidence another friend of mine knew Anton Furst’s niece and I was able to make an appointment with Anton before I attended the show.

My first encounter with holography exceeded my expectations and was a tribute to the quality of that show, Prof. Phillips’ work was exceptional. Anton was a fabulous guy, a very comfortable person to be with. His advice was genuine and he suggested that even with substantial resources holography was a difficult and not very profitable medium, would I like a job roadying in the states with the Who’s lasers?! I was very grateful and quite tempted but not the sort to ever be deterred easily and I declined. He was right though and it still holds today, holography as an art form is a passion, not for the scientifically squeamish or economically driven. Until recently the same went pretty much for most forms of 3d.

I promptly sold my new hang glider to raise the funds to get my first laser. I managed to get into an electro optics and laser exhibition at the Brighton centre where I met John Wolfe, also a very nice man, and another man who sold me that laser. Within a month or two of going to the Light Fantastic Show I had produced my first hologram in the top room of my house. I need to thank Laurie Wright (radiology Royal Sussex County hospital), Mr Bristow (Brighton college) and Prof. Phillips for my subsequent education in the medium. 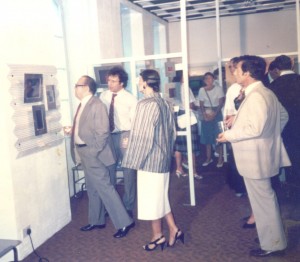 The late Sir Joshua Hassan at the Laserbase Exhibition

Soon after this I developed a youthful wanderlust and sold the shop premises I owned in Hove to buy a cruising catamaran on which, complete with laser and some holograms, I sailed off in search of adventure. I found it in Gibraltar where, in 1986, I set up the Laserbase exhibition of holography. This consisted of images produced by Richmond Holographics, Light Fantastic Galleries and Third Dimension. It was opened by the chief minister, the late Sir Joshua Hassan, who also attended the inauguration of a fully automated laser show which I designed and installed some time later. 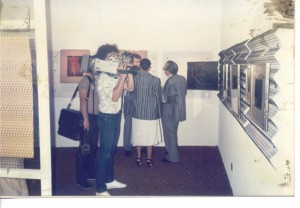 After about two years I closed the permanent exhibition and took the exhibits on a tour of  Southern Andalucia in conjunction with  Sr Manolo Ramirez Fregg, director del centro occupacional ‘Punta Europa’, Algeciras. The tour was in support of an Expo 92 project and I produced holographic works of my own for it. Examples of my work were presented to President Felipe Gonzalez (president Andalucian government), Sr Julio Cuesta (director Expo 92) and the mayor of Tariffa. The mayors of Tarifa and Algeciras presented me with silver plaques, to commemorate the project.

1990, back to England. I had for some time felt that developing my holographic skills was fruitless with no market. A number of people were making extremely good holograms but due to lighting constraints with the product were struggling to survive. I always felt they were making ‘cars’ in an environment where there were no ‘roads’. This formed the basis of my advice, when I provided consultancy for the offices of Charles Stanley and Co. in Gibraltar, on the flotation of Applied Holographics and their intention to build the ill-fated Holocopier. So on my return to the UK I set about addressing the problem of displaying holograms and invented The Hologram Lamp, a table lamp designed to carry and properly illuminate holograms. At this time though the medium was dying rapidly and the investment market wasn’t motivated much by patents that only covered the UK. I shelved my activities for some time until digital imaging started to come of age. 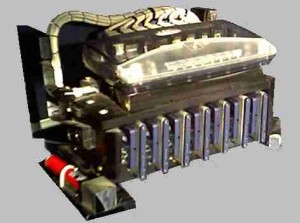 I realised that the production of lenticular 3d images would be dramatically affected by the digital revolution and decided to use my electronic and mechanical design skills to build multi lens cameras, Deepcams, to capture 3d. The first one, the Mag7, consisted of seven credit card size cameras, simultaneously mechanically triggered and with 45deg mirrors to achieve an appropriate lens proximity. Had a lot of fun with it but the achievable printing standards with a desktop printer fell way short of the mark. 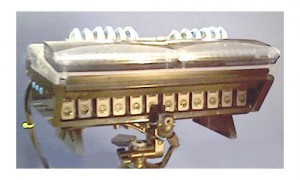 Then came the X12, twelve of those same credit card cameras, disassembled, the surface mount sensors detached and soldered by hand, remounted at 90deg to the backplane and integrated into a neat unit with integral usb hubs, independent viewfinder cam and remote trigger. It was supported by the modification of an Epson R800 printer, modified to pitch with an effective resolution of 2200dpi. A unique desktop printing solution that I still use. 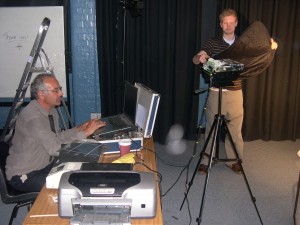 Introducing the students at De Montfort to the X12

The X12 was purchased by Prof Martin Richardson of De Montfort University, in part, by way of supporting my development work. I am pleased to be able to thank him publicly here for that support.

Unfortunately the rapidly changing world of modern electronics soon meant that the camera modules were unobtainable and the unit became unsupportable, so I built each of us a new Deepcam. 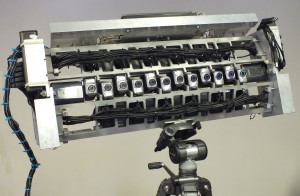 Capable of producing high resolution stills or video and real time transmission, providing either wide angle multiframe 3d or variable lens pair selection for stereoscopy. For six months I tried to get someone in England to produce a flat cable to relocate the lcd monitors to no avail. Eventually, to achieve the necessary lens proximity I inverted half of the cameras and interlaced them.

It’s rather bulky but I’ve achieved some remarkable hand held shots, including running backwards through a field full of pigs to produce the ‘Give us a kiss’ fridge magnet. It produces beautifully solid 3d and is ideally suited to portraiture.

Since building the VX12 I’ve been experimenting with it and the range of images I’m producing is expanding slowly but steadily.